It Doesn't get any Uglier 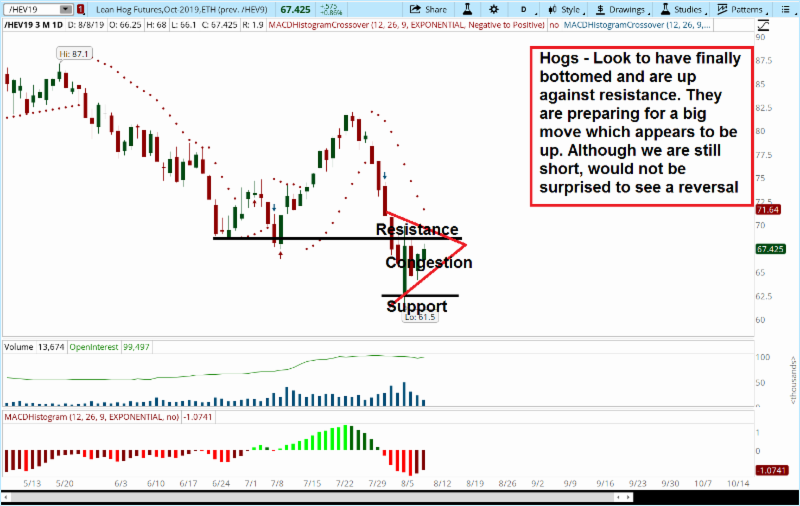 For farmers and producers’ weeks don't get uglier than this one. From the Tyson fire last Friday to the USDA report on Monday, there was nowhere to run and nowhere to hide. It was just plain and simple ugly. However, there is light at the end of the tunnel and the entire complex looks to be in a bottoming process.

Then there were equities that were down Monday, ripped 500 higher on Tuesday, down 800 on Wednesday and 100 higher today. Today was the craziest day I have seen in a long time, I started trading at 1:00 am CDT this morning. Markets were higher, suddenly they broke almost 500 points and bounced all the way back to make new highs and repeated the process. It was thin, wild and is signaling a market top. This is the kind of action you see when markets are getting ready for a trend change.

Grains got hammered on the USDA report, at least Corn and Wheat did. Beans survived while all three are in different patterns there is reason to believe they are in the bottoming process. Corn because the sellers have ripped it lower and will get caught short. Wheat is on support and has held these levels and beans are in the middle of consolidation. There may be a little more room to the downside, but the risk reward favors the long side.

Fire in the hole or fire in the barn, Tysons fire destroyed Cattle prices both Fats and Feeders. Fats are still languishing around the lows, while Feeders had a great bounce on Wednesday and a rally Thursday bring them back into consolidation. We would expect similar action in Fats and are willing to call a low here. Hogs are starting to look strong, the blow off bottom a couple of weeks ago and now the churning in congestion leads us to believe they are ready to go higher.

Gold and the Dollar continue their march higher and investors run to the safe haven of both. The Dollar has reached resistance but a break above here brings par soon. Gold is running and looks headed to 1600 as the next stop. Every sell off attempt has been met with buyers. Crude has turned ugly and looks to be in a range of 50-55. Crude is at the top end of the range and should fail.

The Bottom Line: It's summertime and the markets are thin and extra volatile. Equities look like they are ready to turn over and head south for the fall. Grains and Livestock continue the search for a bottom which looks to be close. Crude looks to head lower, Gold and the Dollar higher. This is all about the FED and Central Banks

CORN - A brutal week for Corn, there doesn't seem to be a bottom. Between the USDA report and the panic selling Corn managed to make 3-month lows and are down about 28% from June highs. Although we are short and will remain there until our algo changes, however it looks like Corn is in the bottoming process and will be headed higher. The next couple of days will tell the story.

Position: Short 50% - Looking for a turn

BEANS - Managed to rally from support and failed at resistance indicating Beans are in consolidation. We are short but like Corn could see a reversal soon. The USDA report was not to painful for the Beans and they appear to be picking up a little strength. The range is 860-900 and are starting a pattern indicating a much bigger move is coming. Although we are short expectations are the next big move is higher.

WHEAT - Is firmly in congestion and holding the bottom. We are short but as in the rest of the group are looking for a bottom and expect a move higher once our algorithm resolves. Wheat got hammered on the USDA report but appeared to bottom soon after. As the street gets more bearish, we are getting more bullish which is the opposite of our algo.

DOLLAR - What a week for the Dollar, bottomed last Friday and has gone up almost every day since. Remember this is a FED and Central Bank issue. The powers up manipulation are starting to wear out, Dollar buyers are flooding in. The Dollar is headed to PAR despite the interest rate manipulation.

CRUDE - Like the rest of the markets it was a crazy week for Crude. Bounced 10% culminating in a huge blow off on Tuesday and a reversal on Wednesday. The pattern suggests lower although our algorithms turned long on Wednesday. We always follow the algo even when not in agreement. We actually added where we wanted to add to our shorts. We are expecting Crude to trade into the 40's before the year is over.

S+P - Lower Monday, monster rally on Tuesday and a meltdown on Wednesday. All we have here is a market in wide sweeping congestion getting ready for the next big move. However, we reversed to long last Friday morning and reversed back to short today. This congestion pattern can last for an extended period of time, but our expectations are a huge move lower over time.

GOLD - Continues to entertain with its wild movement which continues to be higher. The move up has been spectacular, each blow off has been met and resolved in a consolidation pattern. Gold has held the 1500 level and now appears headed for 1600. Between, the FED, Central Banks and their money manipulation a floor has been put underneath Gold. The rally should continue for an extended period of time.

FEEDERS - After holding support for days Feeders got hammered on Monday and Tuesday because of the panic from the Tyson fires. This week was limit down Monday, Tuesday, up limit on Wednesday. This action should all be resolved, and the upward action should continue. Feeders are back in the original consolidation pattern and should start to work higher. We expect new highs

FATS - Weaker than Feeders and have not yet found a bottom. We expect a bottom in the next day or so. This action off of a news item usually reverts back to the pattern before which was consolidating higher. There will be a bounce in the next day or 2 and we expect it to be big. It appears the panic and puke selling are about over.

Position: Long 400% - Will hold all (Algorithms got short, but never reverse into limit moves)

HOGS - Held the blow off bottom made last week, tested resistance and is now in consolidation. The bottoms appear to be in although our algorithm is still short. Like the rest of the meats and grains Hogs appear to be ready to take off to the upside. We expect the congestion to end and a breakout to the upside soon after.

Position: Short 50% - Looking for the market to turn