Get a grip on markets when you receive more of Bubba’s Market Insight! SIGN UP 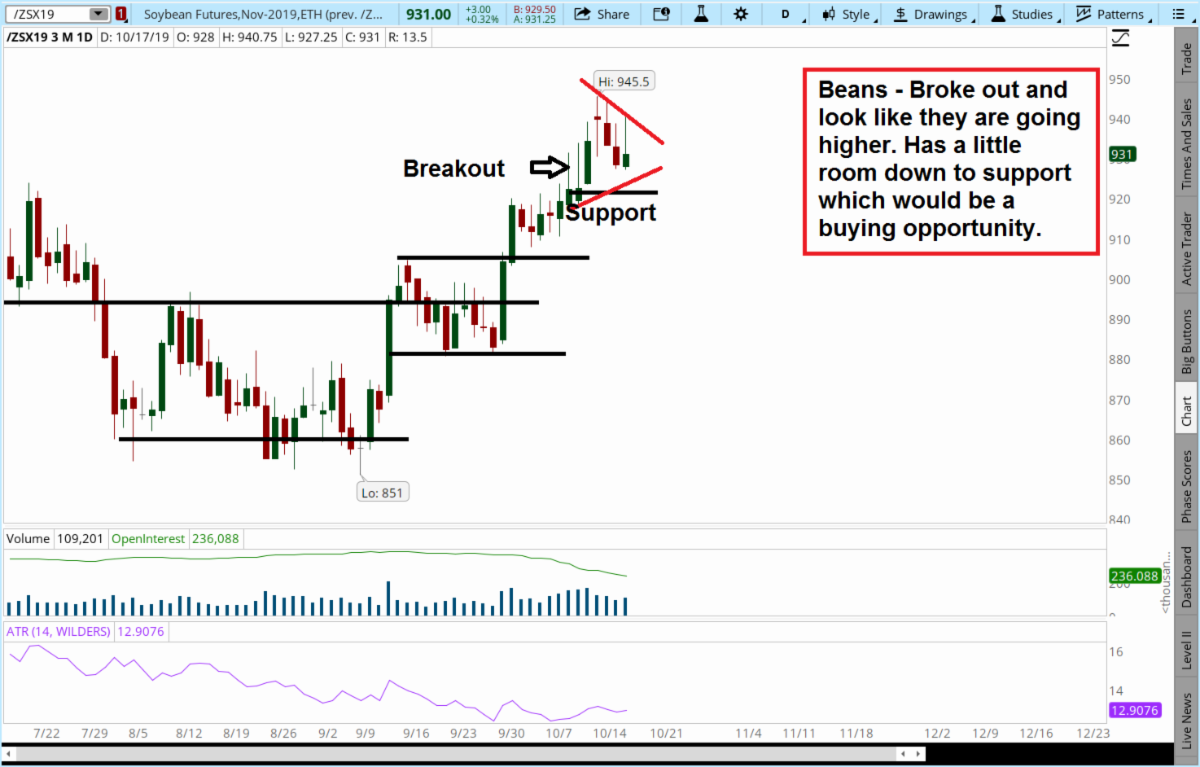 Get a grip on markets when you receive

AG, Equities and Cattle are strong like bull all in rally mode. As we wrote last week the WASDE report was garbage and the Grains were flat hire this week with Wheat being the star. There seems to be nothing stopping equities as they push towards new highs and as much as they have talked down Cattle here it is pushing the highs.

As Equities push to new highs there is no bad news. Tuesday the Retail Sales came out and was a huge miss, markets rally. They really liked the Brexit deal between the EU and UK. We are long but do have two major concerns, the rally has been on pathetic volume and complacency has reached levels that indicate investors have no fear.

We are always price driven and only rally pay attention to volume when there is a blow off involved. The complacency is another issue, we know that investors have no fear, the pundits continue to trumpet this market and there is no bad news. Earnings have beaten lowered expectations and the free money is flowing, always a warning sign.

As we wrote last week the WASDE report was garbage and the selloff laughable. It's obviously they are the same as the FED. In the meantime, Grains look great and have been pushing higher. Both Corn and Beans have failed at resistance which is setting them up for a much bigger breakout. Wheat hit resistance on Thursday and will probably pullback a little in the next couple of days.

Fats and Feeders have been reading our playbook as they continue to push higher. The patterns are very bullish and after pullbacks look for the rallies to continue. We are looking for 120 Fats and 150 Feeders. Hogs continue with wild trade moving near limit up or down every day. Hogs will pick a direction soon and although we are short, I would think the move will be up.

The Dollar got pounded this week as the FED finally did enough to devalue your dollars once again. We are still looking for PAR after this sell off and we are short. Gold continues trending lower with 1500 December futures as resistance. Our targets down 1480, 1460. Crude after the massive break has been consolidating and looks ready to break lower.

The Bottom Line: There is a lot going on throughout the news cycle which means nothing except the short reactions they create. I'm hearing that harvest is going to be weak and production may only be at about 75%. Equities look destined to hit new highs. It's quiet out there but markets are moving be prepared.

CORN - Traded perfectly this week, failed at resistance on Sunday night just over 4.00, held support at 390. The action is very bullish and poised to breakout to the upside. We expect to see Corn well over 4.00 and a big 4th quarter rally. The algorithms are long.

BEANS - Like Corn, Beans broke out before failing and is trading at resistance. The rally should continue, and we expect to see continued new highs from here. Trade wars or not the pattern is bullish and there doesn't seem resistance in the way of a big rally. The Algorithm is long

WHEAT - Continues its uptrend and now has its sights set on new 3-month highs. The pattern is bullish, add in the massive short positions being held in Wheat could create a huge rally. We look for the rally to continue and new highs to be made. The algorithm is long

DOLLAR - Has succumb to the pressure of the FED and is possibly breakdown. We are still targeting PAR however the immediate pressure being created by the FED and now the Brexit deal agreement could take the Dollar lower. We would be looking for a pullback to 97 and see the action there. The Algorithms turned short this morning -

Position: Short 50% - Watching the blow off

CRUDE - As we roll to December Crude, we can see a consolidation pattern forming along the bottom end of the range. We are short and looking for this pattern to resolve itself to the downside. We are looking to add to our short positions selling rallies. The algorithms are short

S+P - This morning’s Brexit Deal between the EU and the UK has sent the S+P flying higher. The S+P is now on course to make new highs. We have reversed to long and expect the rally to continue, the only issues are the lack of volume and decreasing volatility. The markets are too complacent and at some point, reverse. The algorithms are long

GOLD - Has been consistent in the recent downtrend and all rallies have been sold. The Brexit news sent Gold lower; we are sellers at 1500. As the Gold bugs try to make a case for the bottom the algorithms remain short. The pattern is weak and until that changes sell rallies.

FEEDERS - Continue to rally making new recent highs every day. There is no reason to believe this rally will stop anytime soon, until proven otherwise Feeders should be bought on dips. The formation for Feeders is perfect, there could be a stall at 147 November Feeders. Algorithm long as are we.

FATS - The rally continues, and we are very close to our first target of 115. Once Fats breakout over 115 our next target is 120.We would look for a little consolidation at the 115 level before breaking out to the next levels. Algorithm long as are we.

HOGS - Remain wild and in congestion as they tested the top end of the range. The moves remain wild on news and limit moves up or down have become the norm. Hogs are the only product in the AG space we are short. An up close in the next couple of days will create a reversal, for now the Algorithms are short

Get a grip on markets when you receive